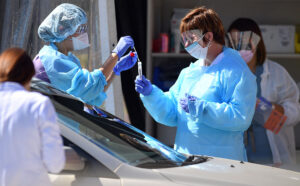 With the present coronavirus situation, everyone’s worried about what will come next. And more than that, we’re all worried about how we can save ourselves from being infected with this disease. Even though most of us are following the SOPs, is that enough? Certainly not! As there are tons of more factors regarding the situation that need to be kept in mind and worked forth.

One of the major things that are needed to handle the situation effectively is to test more and more people. However, if we take a look at the condition today, there’s hardly any country that has been able to manage enough testing kits for frequent and rapid testing. And as a matter of fact, that has been of the intense reasons for the spread of the disease. Since obviously, we aren’t even sure of who is carrying the disease.

It’s Time US is Taking Actions:

Now according to the present statement by Dr. Fauci on Tuesday, the US will be ready and heading forth performing more and more testing for its people. Even though President Donald Trump suggested a slowing down of the testing in the coming days. But since that is no solution to deal with the disease, the federal government has decided more testing than what was already being held.

In a recent testimony, when Dr. Fauci was asked about his views on Donald Trump’s statement of slowing down the testing, and whether he also agrees to it. In response to this, Dr. Fauci explained how the testing will not be reduced but rather increased over time.

Now since Fauci has played an important role in the President’s administration responses on the pandemic, we can certainly look up to this statement. And since that’s going to be a positive change for the US in times of this pandemic, we can surely consider things getting better, or at least, less difficult to deal with this disease!