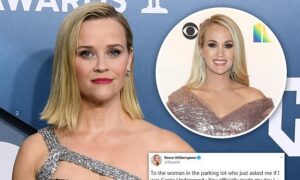 Remember that legally blonde actress we’ve all adored? Yes, I’m talking about Reese Witherspoon. This American actress, producer, and entrepreneur has received great fame and recognition over time. From all her roles in the best grossing movies to the popular awards, she’s managed to achieve a lot over a short time.

And all of it has made her quite the famous start she is today. And other than that, the 44-year-old actress has also been one of the highest-paid actresses of the world; as of 2019. Some of her major awards include; Academy Award, two Golden Globe Awards, and a Primetime Emmy Award. She won all these aards fir her remarkable performance in the movie “Walk the Line”. Now with all that achievement, one can surely be proud of their achievements, right?

With all the achievements, it’s hard to say if someone would want to be mistaken as someone else. However, earlier this Sunday, when Reese ran errands in LA, she found someone asking her if she was Carrie Underwood.

To this, the famous 44-year-old actress posted a tweet stating “To the woman in the parking lot who just asked me if I was Carrie Underwood: You officially made my day!’

Witherspoon has been quite a famous and successful actress for a while now. And not just in her professional life, but her personal life has been quite a struggle that led to a happy decision afterward. The Big Little Lies actress had earlier ended her nine years marriage with ex-husband Ryan.

Shortly, three years after this, in 2011 she happily married the talent agent Jim Toth. And from what we can look now, Witherspoon has had a happy and successful married life with Toth, along with their seven-year-old son Tennessee.