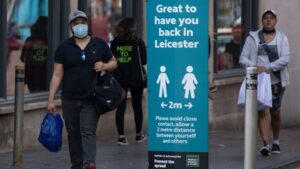 The coronavirus pandemic hasn’t left any city or region unharmed or unaffected due to the incurable disease. Similarly, the city of Leicester has also been facing a hard time to cope up with the disease. Now, this intense situation in Leicester is because of the lack of communication of the government with the city council.

Hence, the mayor’s review of the condition refers to the situation to be intensely frustrating; due to the less awareness in the city and negligence by its officials.

Recently the mayor, Sir Peters Soulsby; declared that instead of a complete lockdown, the government had instead suggested that the city would impose the restrictions for further two weeks. According to government officials, this would be enough to control the outbreak in the city.

Now the city has experienced a total of 2,987 positive tasted cases of coronavirus in the city; from the start of the epidemic. And keeping this calculation in mind, the president further includes in his statement that the situation is getting very frustrating.

Since the government officials are suggesting an extended implementation on the present restrictions for two more weeks; instead of going for complete lockdown.

Furthermore, the reports that highlight Leicester’s detailed situation due to the outbreak; a lot is missing that leads to a lack of information needed to handle the situation. And therefore, the information in the reports might not be enough to further promote the restriction in the city; when the whole country has started easing it.