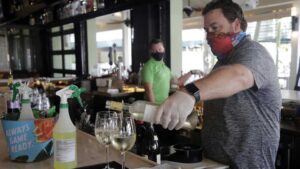 With the coronavirus cases rising to their extreme in almost every territory, it’s hard for one to say or think of even getting started with the businesses or populated gatherings in any way. And as a result, the entire world is continuing to make the lockdown strict.

However, the lack of consciousness and desire to control things on time by facing a little economical loss has certainly caused many territories to face an overwhelming coronavirus situation. this most importantly includes the US, France, etc.

Furthermore, Florida has been one of the states that have not been able to flatten the curve. But instead, the cases in Florida have been rising continuously, and the death rate is more than ever.

Since the confirmed cases in Florida have reached near 9000 in just two days, the governors in Florida decided to take a step to lessen the spread furthermore. The banning of alcohol consumptions in the bars of Florida was announced by its agency on Twitter; as a preventive method to stop the disease spread.

This was considered necessary as the young adults were seen flooding the bars for alcohol – after the reopening of Florida. But since this reopening caused them a total of 24,000 new reported cases, after the last confirmed reports of Saturday. Hence, it’s quite clear that the increase in the case was much attributed to young adults.

Though things have already gotten out of control, especially since the confirmed cases have reached an overwhelming number. But with the decision of banning alcohol in the bars, one can surely have hope for the coming days.