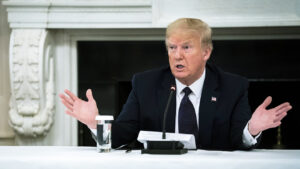 After many presidential polls, Donald Trump may lose its election if he doesn’t put his beliefs on winning polls battlefield. Because Joe Biden is leading over Trump by 9 points according to report.

It has seemed that Donald Trump has ignored from white house voters. He is chasing the former VP in all over the states. It too early for Trump to lose the election polls, and if it continues like this, Trump might be drop out of the election against Joe Biden.

It has reported that Donald Trump might be drop out if he doesn’t believe in himself to win this battle from Joe Biden. But Donald Trump has tweeted about polls and his all-time favorite news channel FOX news;

“Sorry to inform the Do-Nothing Democrats, but I am getting VERY GOOD internal Polling Numbers. Just like 2016, the @nytimes Polls are Fake! The @FoxNews Polls are a JOKE! Do you think they will apologize to me & their subscribers AGAIN when I WIN? People want LAW, ORDER & SAFETY!”

It means Mr. Trump will going to lead over Joe Biden and other Democrats soon. But the organization of polls is displaying that Donald Trump is continually losing with margin. In these pandemic days, Trump has questioned finishing this virus with strategy, which affects his elections severely. Many people disfavor Trump due to not so proper handling of Coronavirus, and massive protest asked for justice after the murder of George Floyd. These two incidents affect Trump’s reputation in Polls badly.

Who will win this race? Who will prove itself best for the white house? All will soon know it. It is not over yet. Let’s see next if Trump will drop out from polls in the election battle.